Borneo is one of the few places in the world where traditional tattooing is still practicedtoday. Archeological evidence has shown that ancestors of some contemporary native tribes have lived in Borneo for over 50,000 years. The term, “Dayak” is applied to a variety of natives tribes including the Ibans, Kayans and Kenyahs.

Headhunting and tattooing were intricately connected in the magic, ritual and social life of many tribes. The hand tattoo was a symbol of status in life and also served as important function after death.Tattooing, piercing, and other traditional Dayak arts are of great antiquity. Many of the traditional tattoo designs resemble decorative motifs found in the art of Bali and Java, and the tattooing instruments and techniques used by the Dayaks are similar to those found throughout Polynesia suggesting that Stone Age voyageurs shared their knowledge throughout the area.

This amazing culture of tattooing created one of the most famous tribal design of recent modern history, i am talking about the Bunga Terung or more wildly known as the Borneo Flower. This particular design would come across the eyes of tattoo aficionados all over the globe trough magazines that reported the amazing culture of dayak tattooing.

Apparently there is very limited information about the concept behind this symbol, but as limited as it is, it holds interesting analogy’s with the natural world. 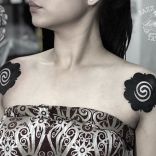 All the tattoos, following the eggplant flower, are like a diary. A young male would go out on his own to find knowledge and from each place he went to he would get one tattoo to mark not only where he is from but also where he has been. From each place the tattoos have different styles so the regional differences in his tattoos would tell the story of his journeys in life.

The traditional Bunga Terung tattoo has such a deep meaning behind it;
1) One on each shoulder for the ‘Berjalai’ journey to make you stronger to carry your travelling pack.
2) Protection
3) the centre coil to symbolise the transformation from a tadpole (young man) to maturity.

This is one of  the most famous and aesthetically pleasing tattoos we saw come out of the tribal tattoo boom era. sometimes a beautiful shape would coincide with a beautiful meaning.